As a leader in online drivers education for teens in California, we often get focused on the immediate and practical tasks at hands, that is helping teens to learn the necessary skills to be able to pass the California DMV’s written driver test and then proceed to the necessary behind-the-wheel test. The goal for a teen is obviously to get a California drivers license. The great thing about our system is that not only can teens study for the test online but also we are helping many young men and young women to achieve their dream of becoming licensed drivers in the Golden State. It’s exciting! 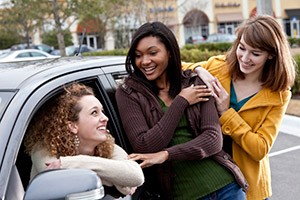 That said, let’s take a moment and review some of the somber statistics about car accident injuries and deaths (which can be pretty depressing) and then we’ll identify some ways that teen drivers, and in fact all drivers, can take positive steps to reduce accidents, injuries and deaths on the roads of our great state, from Eureka in the North to San Diego in the South and everywhere in between. First some facts.

The California Office of Traffic Safety indicates as follows.  With the latest data available, traffic fatalities decreased 1.1% from 2013 to 2014, from 3107 deaths in 2013 to 3,074 deaths in 2014. The 2013 Mileage Death Rate, that is fatalities per million miles traveled is 0.91. Among the contributing factors to traffic accidents of all types, including but not limited to those that ended in a fatality, are alcohol and drugs. 883 fatalities in 2013, and 882 fatalities in 2014 were linked to alcohol-impairment (drunk driving). Approximately 29% of all fatalities, in other words, are linked to driving under the influence of alcohol. California is slightly better than the national average of 31%. Drug-impaired driving was linked to 32% of fatalities in 2013.  With respect to teens, specifically, 220 teen deaths occurred in motor vehicles in 2014, vs. 2016 in 2013. Males made up 76.9% percent of teen driver fatalities. (Source: http://www.ots.ca.gov/OTS_and_Traffic_Safety/Score_Card.asp).

On the national level, the statistics are equally sobering. There were 29,989 fatal motor vehicle accidents in the USA in 2014, which resulted in 32,675 deaths. (This compares with 4,425 total American deaths in the Iraq war, and 2,326 in the Afghanistan war). Obviously you can’t “compare” deaths from one to the other, in the sense that any unnecessary death is a tragedy. The point is to put in statistical perspective the challenge of reducing auto fatalities in the United States. (Source: http://www.iihs.org/iihs/topics/t/general-statistics/fatalityfacts/state-by-state-overview).

What can be done, and more importantly what can YOU as a teen do to reduce auto accidents and auto-related fatalities? Here are some todos for you (and your friends) –

Finally, “if you see something, say something.” We see this all the time in airports and public facilities with respect to terrorism. But it goes for teen driving (and adult driving for that matter). If you’re a passenger and the driver isn’t being responsible, “say something.” Communicate to your parents and friends that you care about them enough that they should be safe for their sake, for your sake, and for the sake of the unknown stranger who can be devastatingly impacted by a wrong decision. It can wait.